To many Chefs can spoil the Linux 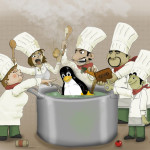 Linux is an Open Source Operating System that has been around for some time.  It is an incredible operating system.  However, it has never made any real impact with the masses as it could have.

One of the biggest issues for the lack of Linux adoption has been the shortage of easily accessible, basic information for the average user.  Linux is not strictly for computer programmers as much of the public perceives it to be.  Linux can be as easy to use as a Mac or Windows system and in some cases easier.  But trying to find information that the average user can wrap their brain around is difficult at best.

That being said, the greatest challenge that Linux has failed to face from an average computer user’s perspective is the lack of education on the number of “flavors” available to them.  There are literally dozens if not a hundred different versions of Linux available to the average user distributed by just as many different individuals or organisations.  Some have a fee and some are free.  But what really makes them different to each other outside of the name and interface?  To the average user they have no clue and that is the problem.  Realistically there isn’t that much that separates one Linux distribution from the other for the average user, other than the interface and possibly some features.

Which one does the average user need?  Which one offers the most features they would find appealing to them?  Which one will allow them to accomplish the tasks they need to accomplish?  The answer is …all of them.  The Linux community has confused matters for the average user to the point that they just don’t bother looking at Linux to being an alternative to Windows or Mac OS.  Why?  Because in the Consumer’s eyes they don’t need 25+ different versions of the same Operating System, they want one; and having to sift through understandable information to determine which is best for them, it’s just not worth it.  And what is truly the difference between those 25+ versions except for a different interface in most cases?

Look at the difficulty Microsoft had with Windows Vista early on:  Home Basic, Home Premium, Professional, Ultimate and Enterprise.  Granted there were differences between each of them, mostly dealing with features, but it was still Windows.  They looked primarily the same, they all performed tasks the same way, they allowed users to find things in the same way, the list can go on.  But the average user has no clue if any of that is true with Linux or not.  Whose fault is that, the average users?  Nope, it’s the Linux community’s. 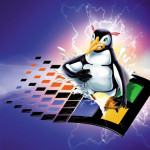 Early in its life Linux was heralded as the “Windows Killer,” but that never transpired.  In fact Linux has barely put a dent in the Operating System market since its release.  That’s pretty sad if you ask me.  Linux is an incredibly powerful and stable Operating System that could have done a LOT more for the public IF they actually stopped splintering and started marketing to the consumer in a single effort.

“It’s Open Source,” the Fan base says.  Yep it sure is but that doesn’t mean they can’t herald the benefits as a single voice.  Some tremendous and innovative programs come from the Open Source community; there are several I recommend to clients because they just can’t be beat.

In the last ten years the ability to spread the word with little to no marketing dollars has become more and more available.  Yet the Linux community still remains essentially silent to the masses.  Why?  Linux has a great deal to offer the average user.  Yet with all the internet has to offer in the way of options for broadcasting Linux’s message and what it can offer, there isn’t a great deal being done.

I don’t see Linux staying alive for another 10 years for a few reasons and that’s pretty sad.  The first is still the lack of a community outreach and education on the benefits of Linux.  This is a truly solid and easy to use Operating System.  The second is that Google is getting ready to release their Operating System, Google Chrome, and that my friends could very well be the end of Linux.  Finally, Linux has yet to truly jump into the mobile device arena.  An arena that is pretty much the direction things are going.  As of October 31, 2013 only one Linux developer has officially jumped into the Mobile phone platform.  Seriously?!  It took that long?

Yes Linux may hobble along for some time because of the faithful; but eventually there will be less people using it than there is now and it could very well go the way of the dodo.  That is unless they start a collective education program for the masses.

If you have an old machine you’re thinking of replacing; DON’T.  Well don’t throw it away when you get the new one.  Go to one of these Linux sites listed below and download their version of Linux, you will be pleasantly surprised at how easy it is to set-up and use.  It could extend the life of that older machine or give it new life for the kids to use.  Either way, it’s definitely worth a look.

What a Long strange trip it’s been. A Flash in the Pan