A Flash in the Pan

I love Flash; it is such fun to work with, but its popularity is waning from a website point of view.  Much of that has to do with the Mobile revolution and the evolution of other technologies.

Flash was at one point very popular for building cool and creative websites, but technology has evolved to a point that many of the things Flash was known best for can be done by other means.  JavaScript, HTML5, CSS3, etc. have not only replaced Flash but have also surpassed it in many respects.  One of the biggest challenges for Flash, even in its hey-day, was working with Search Engines:

Flash is a closed application, even with the current Program Language used for developing a Flash website; Search Engines are unable to read Flash for anything other than the code, which it is trained to ignore for ranking.  None of the content you see on a Flash site, i.e. page text or images will be displayed for the Search Engines to read and catalog; which is what they are trained to do and give the highest priority too.  Here are two examples of two different websites; one using Flash (example A) and one using WordPress (example B).

These examples display the code that Search Engines go through when they catalog a web page.  As you can see, example A does not contain any content that a visitor would see, only the code for Flash to display that content.  Example B displays the code and the text that appears on the page.  So which one has a better chance of being cataloged properly by a Search Engine?  You guessed it…example B.

Early on, Web Designers and SEO Services had work-a-rounds for Flash’s struggle with Search Engines; Keywords played a much more important role in ranking.  Some of those work-a-rounds would be for Web Designers to build sites using a combination of Flash and HTML, and then of course there were SEO Services that would use less than conventional means to get results.  As a consequence the average user’s search results were not quite what they were expecting.  Search Engines like Google adapted and started putting the content of a page and other aspects higher up on the importance scale.

It is no longer a matter of loading your page with Keywords and a lengthy Meta-Description.  Search Engines are looking for what appears on the web page, headings, relevant repetitive words, images with alt tags, and a properly written description, etc.  These are only a few of the items that hold meaning to Search Engines that Flash just can’t provide.

Add the development of technologies that offer many of the creative flexibility that Flash offered and still allow Search Engines to do their thing and you had less reason to build a website strictly using Flash. 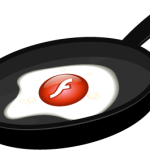 Flash has seen better days from a website perspective.  The Mobile revolution has played a big role in that as much as Search Engines.  Mobile devices no longer run Flash and to use it for your website makes no sense from a cost perspective.  Why?  Because you have to develop and maintain 2 websites; your Flash site and then one that can be viewed on a mobile device.  Large companies have the resources to build a Flash site and maintain a Mobile site that is just as compelling; small and medium businesses do not though.  The ability to develop a website without Flash that will look just as good on a desktop as it does on a Smart Phone or Tablet is a lot less of a challenge today both finically and in developing.  Yet, I still encounter Small Businesses using an all Flash site and I have to wonder; why?

For a Small Business to have an all Flash site is pretty self-defeating.  Social Media can help an all Flash site but that is neither a replacement nor a fix for a well developed, well written website.  Relevant content and the proper use of other elements are what help the Small and Medium size Business the most.

The role Flash plays on the internet is changing and will continue to change for the next couple of years.  While it won’t disappear, it will be diminished until it finds its niche.  At the moment that niche seems to be games like the ones you find on Facebook.

To many Chefs can spoil the Linux What’s the WordPress