When I click that button this thingy pops up. 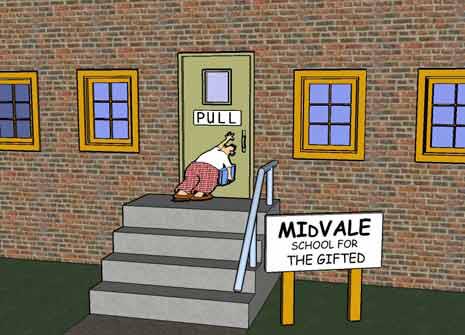 We’ve all heard stories about users doing…”interesting” things with their computers, CD trays for cup holders etc.  I often tell clients and friends that there isn’t much they could do that would destroy their computer outside of putting it in the oven or taking it in the bathtub with them.  As long as you use a little common sense there is nothing you can do that can’t be fixed.

But when it comes to computers, for some reason common sense gets thrown out the window.  I have met some truly brilliant people who when they get in front of a computer common sense seems to elude them.  I’m m not trying to sound mean, but some of those very same people should NEVER sit down in front of a computer.  There have been several times where I’d like to hand them a Legal Pad and No. 2 pencil and tell them to “go to town.”  They will do some of the most ridiculous things and then look at me with an expression of “it was magic” on their faces.

I am going to let you in on the IT world’s “Dirty Little Secret.”  There are no “Magic Leprechauns” living in your computer and there is no “Internet Fairy,” or “Software Genie,” well that depends on the sites you go to.  If we use common sense things don’t go bad too often.

To give you a better understanding of what I mean by common sense getting thrown out the window; this is something that actually happened to me with a client.

I was visiting this client and they were having issues with their system being slow, turned out they had very little memory on it so I recommended adding more.  When I told them the cost and that they could purchase it online themselves when they had the money, they were pretty happy.  I told them that when the memory arrived to call me, and I could install it in about 5 minutes.

About two weeks later I got a call from them saying that their system died.  I asked them what had happened.  They explained that they purchased the memory and it arrived and they had their secretary install it.  I asked him why he didn’t call me to install the memory.  His response was that his secretary was rather computer “savvy” and felt confident installing it for him.  Riiiight.

I asked him what specifically happened.  He went on to say that after his secretary installed the memory the system stopped responding.  No mouse, no keyboard, the power buttons didn’t even work.  M’Kay…what do you mean “after he installed the memory it stopped responding.”  It took a little investigation but eventually I was able to find out that he never turned off or unplugged the computer to install the new memory.  THE THING WAS LEFT ON THE ENTIRE TIME!  Seriously?!

When I got there he was frantic.  All those documents, pictures etc were lost as far as he was concerned and he was already asking me what he should get to replace it.  He was correct to panic a bit.  The “genius” he had install the memory could have really cost this guy a good chunk of money.  Fortunately for him, it didn’t.  All it took was to simply unplug the machine and plug it back in, and then turn it on.  Saying this guy was lucky is an understatement; the secretary, not so much, my fee was taken out of his pay.

The question that I continue to ask myself to this day is; why would you leave a piece of electronic equipment on and plugged in when you are working on it?  Never mind the possibility of damaging the equipment, there is the electrocution factor involved here.  It is the equivalent of leaving your car running while you try to replace the spark plugs.  Sure you could do it, but you’ve guaranteed your nomination to the Darwin Awards if you do.

While this is an extreme example it underscores how often people tend to stop thinking when it comes to computers.

I’m going to let you absorb this story for now.  I will continue part two later on but for now:  Please use some common sense.

“Follow you if you…follow me….” ACT NOW!! THIS WILL CHANGE YOUR LIFE!!